You can buy accutane here.
To read about women's health just visit our site

FOR THOSE WHO CAME IN LATE...

The Earth is under attack.

The demon lord B'harne, servant of the malevolent alien High Magus of Lyra, has commenced his assault on the human race. Under the benevolent guise of the children's television host Barney the Dinosaur, B'harne seeks to destroy the minds of children and adults and bind them to his tyrranical will. Once he has made mindless slaves of humanity, B'harne will rule the Earth with an iron talon.

There are those who oppose B'harne. Drawn together by mysterious forces, mad scientists and sorcerors, warriors, scholars and surrealists have banded together into a fighting force capable of standing against B'harne's power and the power of his masters. With the mystic blade of the Barney-Slayer leading the way, these warriors fight a neverending battle against the forces of Evil and Stupidity.

They are the Jihad to Destroy Barney the Purple Dinosaur.

Welcome once again to Jihad.Net, the home of the Jihad to Destroy Barney the Purple Dinosaur. This is the fourth revision of the page since it first went live back in the early 1990s. In the past, this was a portal to other Jihad pages. These days, Jihad.Net serves as an archive for the fiction created in the Jihad's existence both on the Web and in our birthplace, the Usenet group alt.barney.dinosaur.die.die.die. For over a decade we've been an established internet running gag, and we're all very proud of our accomplishments.

So please, come on in and enjoy your stay.


Yeah, it's been a while. We know. Still, we're updating today with something nice and shiny: 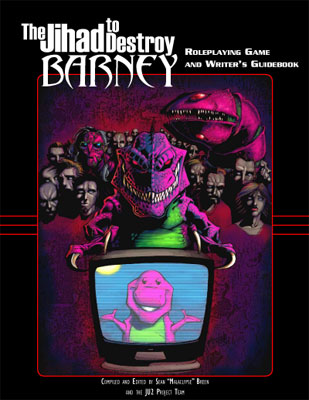 An all-new revision of the Jihad to Destroy Barney Roleplaying Game is available on the Roleplaying page. Lots of new data, new art, and updated to handle GURPS Fourth Edition. This is the product of a year and a half's solid revisioning. Check it out!


The next two stories in the Jihad Universe 3.0 cycle are now available. Go check out the conclusion to the Owsen Arc, Line In The Sand, and the beginning of the For Devil & Country arc, The Day It Fell Apart.


After a period of inactivity, we have two new stories in the Jihad Universe 2.0 collection:

Is Jolt Supposed To Do That? by Elena Oorebeek, our first new writer in quite a long time, and Part One of The Amazing Adventures of Recruit Brenner, by Kat Templeton


The Archivist is pleased to report that thanks to the efforts of Forum user DopefishJustin, we have the following new stories to add to the Archive:

In the Non-Jihad Stories collection, a complete version of Son of Barney.

Also, thanks to Forum member (and the first real new member of the Jihad in a dog's age) Elana, the Jihad Universe 2.0 section now sports the ever popular Operation: Mmmmm... Sprinkles.

Thanks for all the help, guys.


[Graphic: The following PREVIEW has been approved for ALL AUDIENCES. The film
advertised is NOT YET RATED.]

PRESIDENT JACK GROVER (v.o.)
It has come to my attention that there
is a terrorist organization operating
with impunity within the borders of the
United States. They call themselves the
Jihad, and they're extremely dangerous.

FADE IN to the Oval Office. President JACK GROVER and Homeland Security
Secretary WILLIAM LAFONTAINE are in a meeting. GROVER is holding a thick
dossier.

GROVER
You heard me, Billy. I want you to round
these people up. Use whatever you have to,
FBI, CIA, ATF, whatever. But I want them
in jail or dead as quick as you can.

[Music: Clint Mansell "Requiem for a Dream" (or the trailer music for "Lord of
the Rings: The Two Towers" if you prefer)]

SCENE: Federal agents in full body armor, SWAT backup, etc. storm into a large,
modern office building. They run through the corridors, up the stairs and so on
until they reach the top floor office. They halt, all pointing their weapons at
the chair behind the desk.

CLOSE-UP: The chair slowly turns to reveal DR. JONATHAN FNORD, wearing his best
Architect "I am superior to you in every way" expression.

FNORD
Is there something I can do for you,
gentlemen?

EXT. SPIRAL BUILDING, LONG SHOT: The top five floors of the Spiral Building
explode in a towering column of flame.

SCENE: A team of FBI agents push their way through a hostile crowd on Sproul
Plaza at UC Berkeley. Suddenly, the crowd turns on the agents, and shots ring
out. All hell breaks loose. KATZE BRENNER hides from the rushing crowds and the
cops by ducking into a steam tunnel.

KATZE (v.o)
They knew *when* to find us. We only
got out by dumb luck.

GENERAL 1
The President has authorized the use of
nuclear weapons against the terrorists.

GENERAL 2
Nuclear weapons!? Against a target on
American soil!? He can't be serious, can
he?

GENERAL 1
I don't know.
(beat)
But those are our instructions.

SCENE: A *very large* number of bombers and fighter escorts flying in formation
over the Rockies towards Blanca Mountain.

KATZE (v.o.)
We've got to find out why America just
declared war on us.

SCENE: Somewhere with a view in Lower Manhattan. MALACLYPSE THE SEEKER is
holding presidential advisor ROMAN MARX up by the lapels.

MALACLYPSE
(furious)
What the hell have you done? TELL ME!

MARX
(terrified, yet oddly triumphant)
HE'S COMING! The Master is coming back!
You only have days to live, Jihaddi! The
Great Act of Love will sweep over the Earth,
and you can't stop it!

SCENE: Chaos in the streets as protestors, police, National Guard, and
spongified slaves of Barney clash all at once.

SCENE: The Magnificent Twelve Jihaddi cannoning up for the fight. Shot of the
Barney-Slayer being pulled out of storage.

MALACLYPSE
Well, time to go save the world again.

SCENE: DIEDRE GREIST, equipped with a robot that looks like a BattleTech mech by
way of Junkyard Wars, engages in a running... well, plodding gun battle with
Federal agents

SCENE: An atomic mushroom cloud blooms on the surface of Blanca Mountain. The
shockwave causes dust to fall down in the base.

SCENE: Two dragons, one blue as shimmering sapphires, one black as night, (ARIS
MERQUONI and SHADUR T'KHARN, respectively) soar out of the skies above the White
house, cross in front of the camera and come to a synchronized landing on the
lawn, roaring menace and defiance in the general direction of the West Wing.

[TITLE CARD: This time, the whole world is watching...]